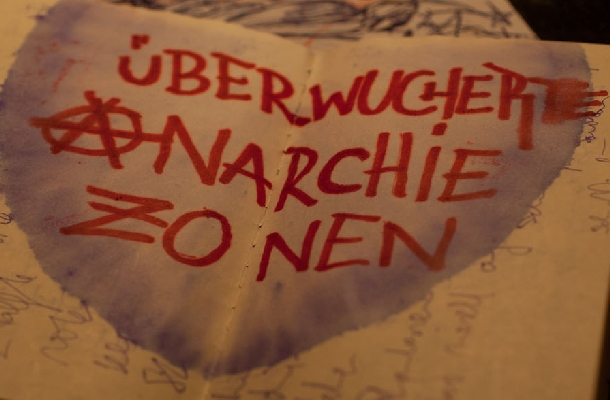 For our project Dizziness–A Resource, we study dizziness, comprising its complementary areas of experience and reflection on it. Based on artistic, art-historical, philosophical and natural scientific sources, we address questions with respect to contemporary art. (Anderwald + Grond)

Dizzy on Stage: Trance in Anthropology and Practice.

Travelling in Ghana in the summer of 2012, I had the opportunity to visit a demon-expulsion. The ceremony showed me an interesting form of dizziness, that of dizziness as ecstatic trance. At the beginning, it was a fairly normal Anglican church ceremony; starting Sunday morning, it continued until the evening. The ceremony took place outside a village on the Kwahu Tafu-Plateau, it was on Ghana’s eastern boarder to Togo, a country rich in animistic heritage. In Ghana, this tradition is less obvious, however it can quickly emerge and break through the Christian surface, seemingly depending on the pastor or the preacher’s reputation and how charismatic he is. The preacher at Kwahu Tafu was well known. People travelled from the surrounding villages, as well as from further away. This pastor, a man in his thirties, wore white apparel, with a red sash around his shoulders and waist, he was accompanied by a young assistant who was responsible for the drums. First, there was plenty of clapping, singing and praying but quickly it escalated. The rhythms of rattles and drums became faster and we danced by the pastor who in turn placed his hand on every forehead. If a demon was inside you, you fell to the ground, shivering like in epileptic shock. The first ones began to fall on the floor, shivering and then were grabbed by their legs and arms and taken away to the back of the room. The pastor sang “Jesus”, he cried. Since the experience I think often about the pastor. He was the middle of the happening, its centre. In his movements and voice, he was part of the chaos and also its reason. He was, so my conclusion found, the best performer I have ever seen. The drums kicked in, the rattles, the singing, the cries for Jesus, the trance possessing more and more people. People were brought to the pastor and he’d spit on them with holy palm oil. An old woman told him about a witch who’d persuaded her to hate the younger members of her family. I guess in Western terms she was envious to an unhealthy extent. The treatment consisted of her being turned around by the pastor, to be spat on with holy palm oil and to have holy sand thrown at her. The woman turned on her feet, arms in the air and continued to do this for over an hour, standing at the fringes of the ceremony. All the time the ecstasies of others kept coming and going like waves on a storm-ridden sea. Her witch-expulsion was a ritual, atoning for her bad feelings towards her family. Always the drums and the rattles sounded, and the old woman turned and turned. That was until the preacher came to her and she whispered something in his ear. “Jesus”, he screamed and she fell, facedown on the ground, shivering, shiny with spit and palm oil and covered in sand. Beforehand someone had told me that this kind of trance doesn’t work on foreigners. The demons and witches are for the locals, who are used to the ritual since childhood. During that Sunday, between cornfields and woods, a dark strange feeling started to grow in my chest. Nowadays I regret that I left after a few hours, but back then I was happy to get away. The whole atmosphere was too strong for me, maybe I was on the verge of falling in a kind of trance myself. Still, it was memorable; the pastor’s leading toward the trance, the rhythms, the ecstasy. TO FULL TEXT: READ MORE